As I started to pray for some people today, the words from John’s Gospel reminded me of the lengths to which Jesus goes to protect and safeguard us.The repetitive curlicues around peoples’ names are like sheep’s wool. We are the sheep and the Good Shepherd loves and surrounds us. Drawing the simple knotty curves helps me to focus. This is not artwork, but prayer work. A pen and markers in hand keep my eyes and hands busy while my mind and heart are engaged in the prayer.

P.S. My husband says this looks like a dessert tray rather than a bunch of sheep. So to reiterate: No artistic skill is necessary to pray in color. Twentieth century poet W.H. Auden describes it dramatically in his Christmas Oratorio For the Time Being:
He is the Way.
Follow Him through the Land of Unlikeness;
You will see rare beasts, and have unique adventures.

A dogwood tree in our backyard produced only a handful of blossoms last year. Ten days ago on Easter Sunday hundreds of nascent blossoms appeared on the tree. Today it is in full bloom. The flowers are a luscious color of deep pink with a hint of salmon.

My normal prayers are abstract, unplanned doodles, but I couldn’t resist trying to draw a dogwood blossom. After I finished the prayer I remembered the legend of the dogwood tree and its flower. The four-petaled flower often looks like a cross with indentations or holes at the tip of each blossom. The holes represent the imprint of the nails; the reddish/brown coloring next to the holes symbolizes Jesus’s Blood. In the center of the flower, the green buds look like a crown of thorns.  I guess the shape was an appropriate choice for an Eastertide prayer! Here are some examples of the way other people used the Lenten calendars.

1. Connie D. read a daily Lenten devotional called Renewed For Life by Henri J. M. Nouwen, published by Creative Communications for the Parish. Each day she chose a meaningful word from the reading and prayed it using her calendar. Even without having read the devotional, I could use the wonderful words on this calendar as a rich vocabulary list for daily reflection. 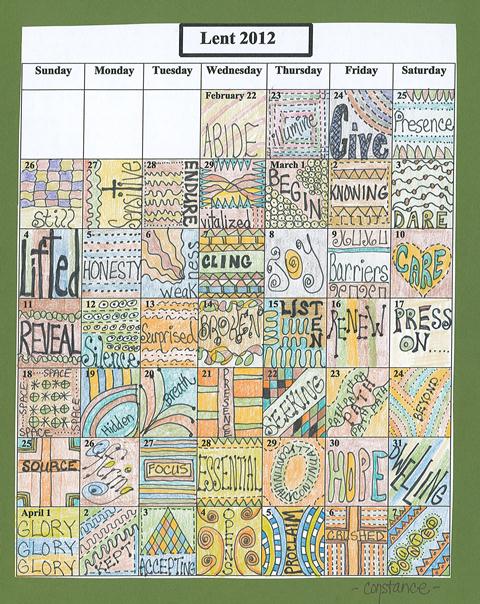 2. A woman named Ellen wrote this to me:
I used both templates this Lent–printed them on opposite sides of one sheet of heavy  paper. I used the honeycomb one to write names of people  I wanted to remember and pray for, OR a prayer for myself during this  time, enhanced with doodles the way you did.  And I used the regular calendar to list brief gratitudes at the end of each day.  I used colorful markers to do both, and found the practice helpful and life-giving.

3. Ellen also shared how a friend used the template:
I also have a friend who used the honeycomb both for herself, as a way to focus each day on a personal discipline she was cultivating, AND one for her 3-year old daughter who colored in a section each day with a different color, while Mom did her own calendar.

Thanks for the great ideas. I liked the “behive” template I used this year (or as a friend called it, the “chicken wire”). The six angles in each hexagon provided nice little nooks for arcs, lines, triangles, and a variety of doodle shapes and strokes.

There are so many names  for God. The ones I used are familiar ones–names I have heard before or read in the Bible. Forty-six words is just the beginning of a vocabulary to describe an infinite, everywhere God. Even the sum of thousands of names is inadequate to describe the one who British Catholic hymn writer Bernadette Farrell calls “God Beyond All Names.” I hope my chicken-wire lexicon will continue to expand in all directions. I hope the handful of words I use to address God will become armfuls–names which are now beyond my wildest imagining. I’d love to hear your experiences with the Lenten calendar–the beehive or the traditional squares.

“Hallelujah, Christ is risen. The Lord is risen indeed!”

Children in the church I attend bring flowers on Easter Sunday and cover a box-shaped or palm-frond cross with colorful blossoms.The children participate in the transformation of the cross from a tool of hatred to a symbol of victory and love. This drawing below reminds me of the children’s crosses. When I look at the picture I want to call it Love Crucified, Arose–the title of a resurrection song by Michael Card. My friend Connie gave me the stencils (by Pebbles) I used to draw the flowers. She incorporates stencils as part of the way she prays in color. For the art-challenged like I am, this can be a non-threatening way to get started.

“Blood is thicker than water,” my mother used to say. The translation of her warning was: “Don’t say anything negative to your friends or to your spouse about relatives because ties to family are stronger than their ties to you–a friend, an acquaintance or even a wife.”  My friends or my husband are allowed to comment on their own family members, but I am not. I know how this works from being a parent. I can say that my children are screwing up or out of control, but if you make that observation out loud, look out! My parental hackles will spring up and my protective pinions will come to the defense of my younguns.

At the RE Congress in LA two weeks ago, I had several dinners with some Benedictine monk friends. I told them of my childhood fantasy of becoming a monk—not a nun, but a monk. “The deal-breaker vow for me would be Obedience, ” I said. “What’s your definition of obedience?” one of the brothers asked. The first words out of my mouth were, “following the rules and commands of some random authority figure.”—clearly, the obstinate response of someone not quite graduated from her adolescent rebellion. My questioner, who had just written a pamphlet for Abbey Press on obedience, quoted from it. “We discover that the fullest expression of our life in community is in a spirit of mutual obedience and service….To be obedient means not only listening to a specific request or instruction, but to be genuinely attentive to both the spoken and unspoken needs of those around us–simply out of love.”1

After that conversation, obedience has been my mind-niggling mantra for the past two weeks. It flashes its nine letters in magazine articles and the scriptures. It’s a frightening word and a desirable word because it’s about intense and intimate relationship. At our best, my husband and I are in obedience to each other. We listen to the needs of the other, receive that information into our hearts, and try to respond. Mutual obedience implies a two-way connection and concern.

Obedience to God might not feel like a two-way deal, but as a willing partner in the relationship I trust God to listen to the desires of my heart. In turn I try to listen and obey. In Thursday’s Daily Meditation via email from Fr. Richard Rohr, he talks about the foot washing at the Last Supper and calls Jesus a “servant lover.” What a phrase! In his gospel, Matthew describes God as I imagine a “servant lover.”
Is there anyone among you who, if your child asks for bread, will give a stone? Or if the child asks for a fish, will give a snake? If you then, who are evil, know how to give good gifts to your children, how much more will your Father in heaven give good things to those who ask him.  (Matthew 7:9-11)

So back to the “Blood is thicker than water” paragraph. Is there anything more binding than blood? In Mark’s gospel the disciples tell Jesus that his mother and brothers are there to see him. Jesus’s jarring response in The Message version is:
Obedience is thicker than blood. The person who obeys God’s will is my brother and sister and mother. (Mark 3:35)

“Obedience is thicker than blood.” That sentence alone will give me at least another two weeks worth of obsession with obedience.

I thought about waiting to post this until after Easter. But today is Good Friday, the day of Jesus’s ultimate act of obedience:
And being found in human form, he humbled himself and became obedient to the point of death— even death on a cross. (Philippians 2:7-8 NRSV)

1 Living as a Saint: A Guide to Community and Communion by Br.Silas Henderson, O.S.B., Abbey Press.